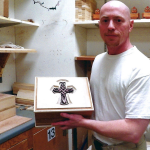 Originally from Seattle, WA, Garridan has continually evolved as a multimedia artisan during his 25 years of incarceration. While he favors woodwork and leatherwork, he has picked up complimentary mediums, such as beadwork and embroidery, to create truly unique pieces that others have overlooked.

His artistic approach to craftwork is a practical matter – nearly every piece has both “Form” and “Function” elements. Containers are square, rectangular, or round, decorated with pyrography (burned) or carvings. Leather bags are appliquéd with beadwork, embroidery, or wood accents. Or a decorative wood chalice has a food safe finish. Even a wood turned pendant can double as a stash box.
“Living in a 6’x9′ concrete box doesn’t allow much room for art for the sake of art – it forces a minimalist lifestyle. Everything needs a purpose, and for me, it also needs to appeal to the eye”, he says.

These days Garridan has been doing volunteer work for Veterans. Beginning with building memory boxes for Gold Star Mothers Association, his work has expanded to include boxes that go to various Veterans’ organizations. Those organizations auction the boxes to raise money to fund their efforts. Garridan’s work is an enjoyable, creative, and positive way to spend some of his time, but is also an honor and privilege for him to be able to give back to those that have given so much for their country.

If you’re looking for something custom, including adding your logo or a special image to an artistic piece, reach out to: Garridan Nelson #739166 at JPay.com, or send a letter to the address below – he would be happy to hear from you!